“Let’s talk about exactly what RSV is. These are the symptoms. I want parents be aware of that, usually fall and winter. It’s like a common cold, but it does hit younger children and it’s really frightening,” Hochul stated. “It’s not new at all. Something we’ve seen before.”

“Infants as young as six months old have been known to contract this. It’s hard to keep kids safe. Think about the fact that a year ago, before a year ago, a lot of kids were wearing masks in a daycare center or in schools and that did give them some level of protection,” Hochul said, failing to mention the studies showing that cloth and surgical masks were not effective at blocking exhaled aerosols. She also did not mention the fact that Dr. Anthony Fauci himself admitted in February 2020 that “the typical mask you buy in the drug store is not really effective in keeping out virus, which is small enough to pass through the material.”

Based on what scientific proof

If she has, it will replicate former Gov. Terry McAuliffe’s monumental gaffe in 2021, when he accidentally told the truth and revealed that he neither understood nor cared about parents’ deep anxiety over Virginia schools indoctrinating children with extreme left-wing propaganda on race and gender.

In a prime-time debate against then-businessman, now-Gov. Glenn Youngkin, McAuliffe said, “I don’t think parents should be telling schools what they should teach.” This crystalline statement of Democratic insouciance toward ordinary people’s interests detonated like a grenade. Youngkin could hardly have believed his ears or his luck. His campaign rolled the tape again and again in TV commercials, dooming the hapless blue candidate in a blue state.

Now, Hochul has done something very similar in New York. The big issue in this case is a ubiquitous sense of threat felt by peaceful and law-abiding citizens because crime is surging. The concern is spread statewide but most acute in left-liberal New York City, where robbery has increased by 38% in the past year, grand larceny by 35%, and burglary by 31%. Numbers like those will depress turnout for Democrats where they most need enthusiasm. 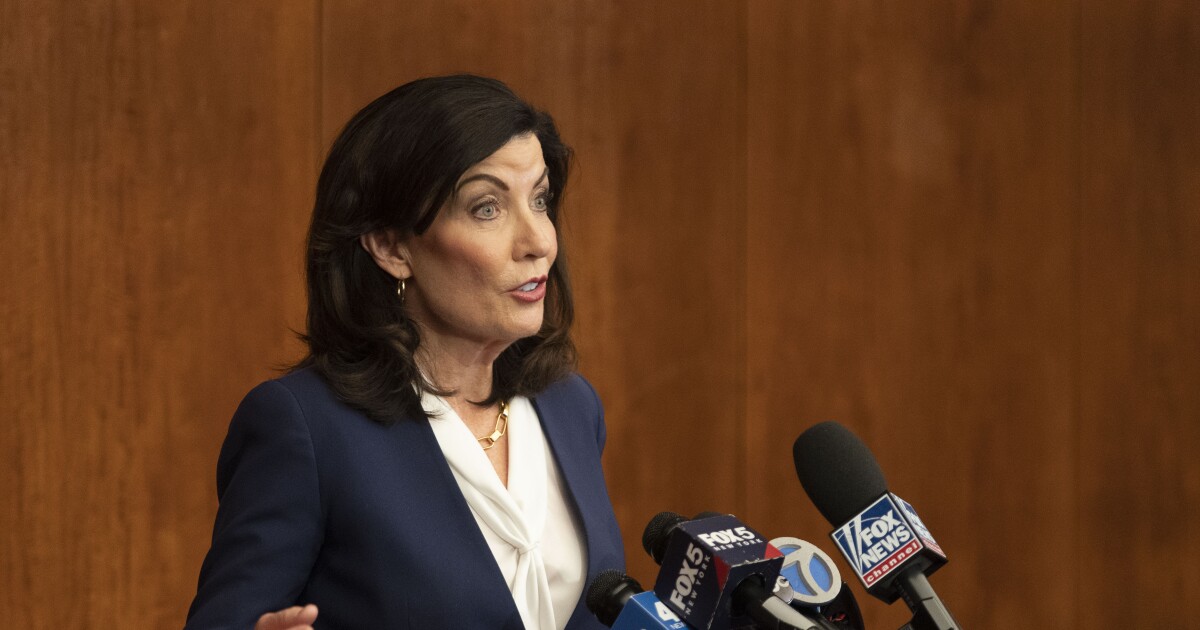 Is recent Virginia history repeating itself in New York? Will a Republican candidate for governor win an upset victory because the favored Democrat reveals a breathtaking nonchalance toward the issue voters care about most?

PREMO Member
Two more parents have come forward to warn New Yorkers about organized crime gangs who are drugging and robbing young men at gay bars in Hell’s Kitchen and are suspected of murdering at least two victims.

The NYPD has formed a grand larceny task force to investigate at least a dozen similar non-fatal cases in which well-dressed victims were targeted by three men at gay bars, drugged, and robbed of tens of thousands of dollars, after their bank accounts were emptied and credit cards maxed out.

The medical examiner also is examining deaths previously thought to be drug overdoses to see if there are toxicological links to the gangs.

While most of the venues targeted are gay bars, at least one victim was approached at an Irish pub in Greenwich Village. 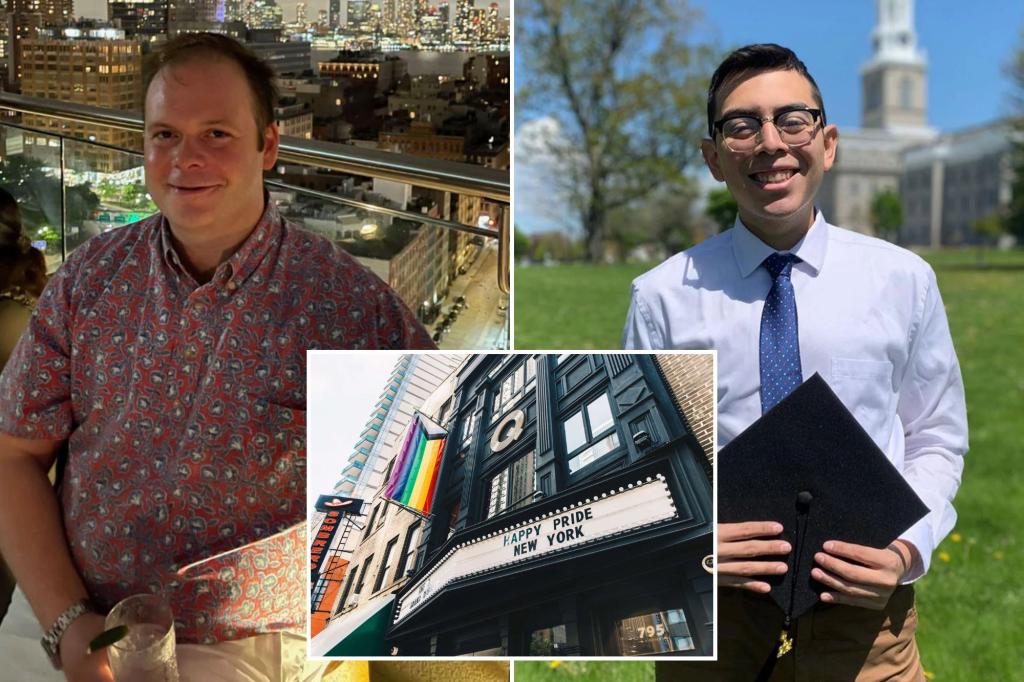 “This same group of killers have drugged, robbed and murdered countless young gay men in New York,” one grieving mother told The Post.

Eric Adams now says ‘fears’ of crime are real, Democrats must deal with it​


“I use the acronym ICE — inflation, crime, economy, that’s it. And no matter how people feel, if you don’t respond to that feeling, you abandon exactly what’s needed,” the Democrat said.

“And Democrats have a good product when it comes down to public safety. They’re afraid to talk about it,” he added.

Adams’ comments were a turnaround from an Oct. 20 interview where he downplayed fears of rising crime in the subway, contending that only a handful of serious crimes occurred underground every day.

“So, I have to deal with those six crimes a day — felony crimes — and the perception of fear,” he told CNN at the time.

A day after the interview, the mayor changed his dismissive tone, telling Fox 5 the city would not be “successful” until “New Yorkers are feeling safe,” but Hizzoner bit his tongue when asked by The Post if he was pressing Hochul on the bail reform issue during the home stretch of the election.

Days after Hochul beat back surging GOP challenger Rep. Lee Zeldin in a race that tightened as the Republican blasted Democratic leaders for ignoring public safety issues, Adams claimed Hochul would be a “real partner” in fighting crime and reforming the bail laws.

“Everyday New Yorkers, particularly in the inner city, they don’t want these repeated offenders. This catch, release, repeat system is just destroying the foundation of our country,” Adams said.

Yeah not that the election is over Adams feels free to criticize Hochul, not giving topics to Zeldin

Yep, you deserve the Gov you vote for ... the rest of us suffer in the Gulag

True to her socialist ideals, Queens City Councilwoman Tiffany Cabán is on a new crusade against the city’s private sector, seeking to outlaw firing.

The city’s “Just Cause” law bars fast-food companies from firing or laying off workers or even cutting their hours by more than 15% “without just cause or a legitimate economic reason.” As The Post’s Carl Campanile reports, Cabán and city Comptroller Brad Lander want to radically expand it “to cover all employees and employers within the city regardless of size or pay.”

And the micromanaging wouldn’t stop there: Cabán’s draft bill also requires employers to fill every new or open position with workers fired for economic reasons, in order of seniority.

More: It mandates generous severance pay and bars employers from relying on worker data “gathered through electronic monitoring” in firing, disciplining or promoting employees as well as requiring them to provide ample notice of such monitoring. And it requires at least 15 days between an initial warning or discipline and termination for cause, except when the firing is for a worker’s “egregious failure” to do his or her duties.

These folks have no idea of economic reality, and likely have no clue why high dollar companies are leaving "Blue" cities.

Back in March, when this incident happened in Yonkers, New York, I described the circumstances this way.


This brutal attack happened in Yonkers, NY last Friday. It started when 42-year-old Tammel Esco directed a racial slur at a 67-year-old Asian woman as she was walking home with a grocery cart. She ignored him and entered the front doors into a small vestibule and then pulled out her keys to unlock the inner door. Esco then entered and hit her in the back of the head, knocking her to the ground. Surveillance video shows he then leaned over her and punched her in the head 125 times. After more than a minute of throwing punches he then stood up and stomped on her face with his foot several times and spit on her.
Click to expand...

The video of the attack was everywhere and it was condemned by everyone from the governor of New York on down. As you can see, this was a merciless attack that could easily have resulted in the victim’s death.

Back in March, when this incident happened in Yonkers, New York, I described the circumstances this way.

The video of the attack was everywhere and it was condemned by everyone from the governor of New York on down. As you can see, this was a merciless attack that could easily have resulted in the victim’s death.
Click to expand...

Wanna bet he's out in less than 5?

PREMO Member
“Upon receipt, all members of the service are required to affix an ‘NYPD phone sticker’ to the outside of their department issued cell phone case, so that it’s clearly visible,” the order dated Nov. 23 reads.

Distribution of the decals comes several months after Mayor Eric Adams Adams told the public to snap a photo of any cops talking on their phones in subways.

“You walk downstairs, you see five transit officers standing at the booth looking at their phones,” Hizzoner, a former transit cop, griped in April. “If you see it, send me a picture. Let me know. Because I’ll go to that district the next day and see exactly what’s happening.” 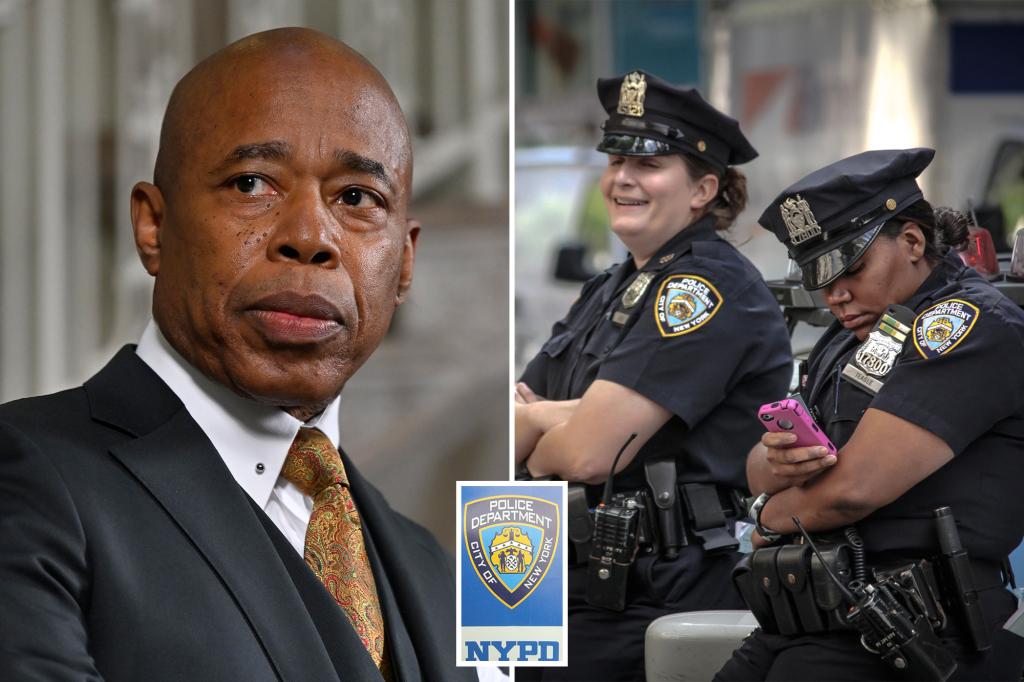 Police brass have ordered cops to attach stickers emblazoned with the letters “NYPD” to their work phones to try to curb personal calls and texting on duty.

Thousands of New Yorkers in city-owned buildings were without heat or hot water for much of Monday — a frigid jolt that included a nightmarish Christmas weekend at an East Harlem building where tenants were left cold, wet and without elevator access after a rooftop tank spill.

“It was like a waterfall coming down the steps. I had to put a towel down so it wouldn’t come in my apartment,” Lincoln Houses resident Chante Hill said of the “dirty water” that seeped into her own and neighbors’ homes after the pump burst sometime Christmas Eve.

The misery was felt elsewhere as well for tenants in some New York City Housing Authority-run buildings.

PREMO Member
“And from some of the pictures that we’ve seen on social media of these looters, they’re not looting foods and medicines, they’re just looting items that they want,” the mayor said. “So these aren’t even people in distress — these are people who are taking advantage of a national disaster and the suffering of many in our community to take what they want.”

Two civilians spoke to a local NBC affiliate about the recent looting.

“Exactly,” the other source said. “They took TV sets. 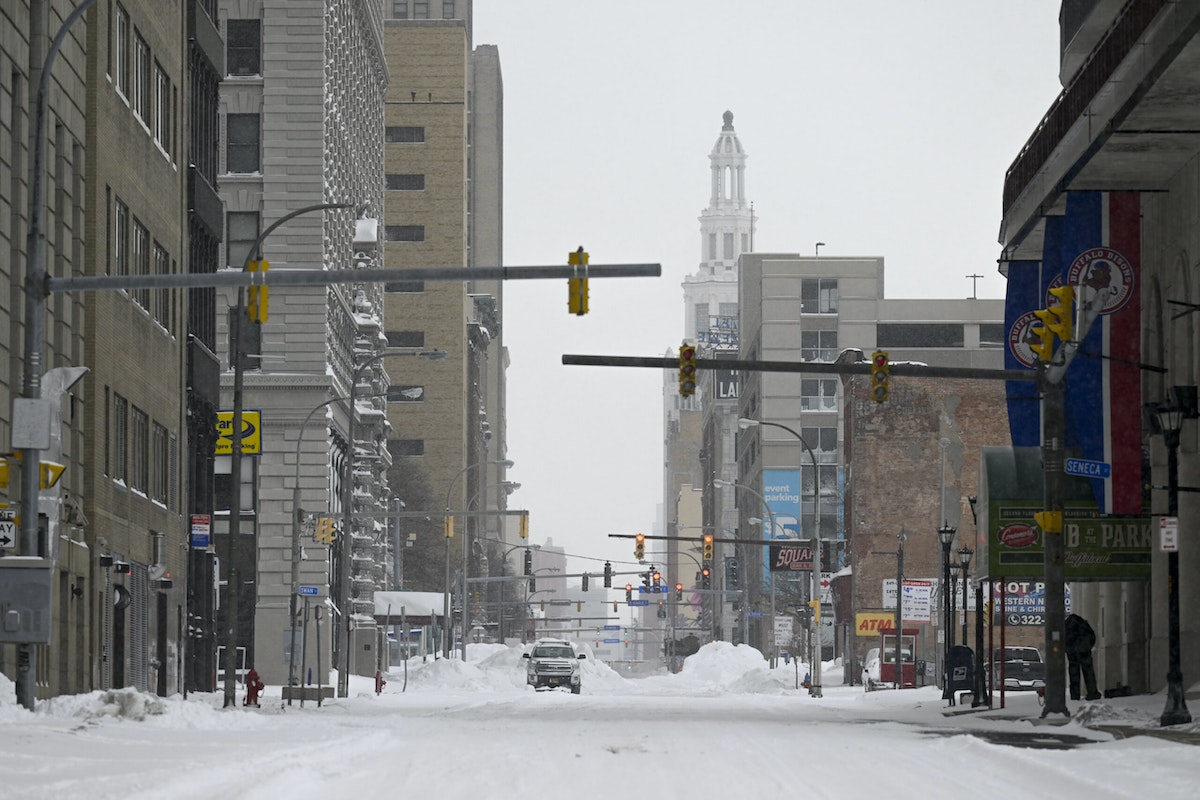 
'If you tell people to leave, they will,' one user tweeted in response to the Democratic governor


Critics of Gov. Kathy Hochul, D-N.Y., slammed the politician for admitting that her government must "reverse the trend of people leaving our state" on Sunday after she told Republican lawmakers in the state to beat it to Florida last year.

During a January 1 inaugural address following her November re-election, the governor vowed to make New York a better and safer place to live, acknowledging the fact that many New Yorkers have fled the state for other parts of the country in the past year. 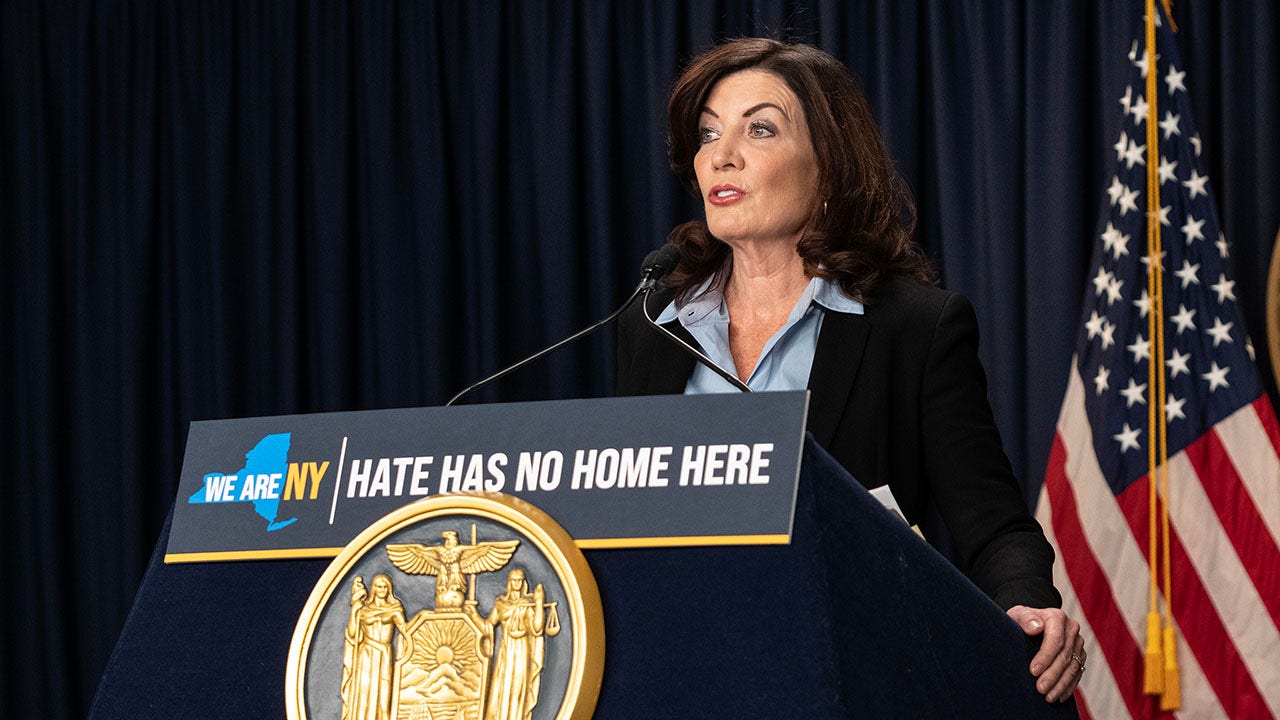 Critics slammed Gov. Kathy Hochul, D-N.Y., on Twitter for asking people to stop leaving the state of New York, after telling Republicans to "get out" months earlier.

Don't listen to her... Keep Leaving!

“The vast majority of people, white mother******* are racist,” he says in that video.
Click to expand...

I never was a racist. If nothing else, being in the military, you ain't got time for all that (the race riots in Yokuska back in the early '70s notwithstanding).

With more and more of this kind of sh*t in our faces every single day, it becomes harder and harder to not be a bigoted a*hole.