PREMO Member
‘The View’ Torches Biden For Going Back To ‘Remain In Mexico’ Policy: ‘He Did Break All Of His Campaign Promises’


But according to regular host Sunny Hostin and guest, actress America Ferrera, that is not enough – and both accused Biden of violating his campaign promises.

“No. You can’t make an inhumane policy humane,” Ferrera replied.

“What should he do?” Behar asked.”First of all, Joe Biden tweeted, ‘Donald Trump’s remain in Mexico policy is dangerous and inhuman and goes against everything we stand for as a nation of immigrants. My administration will end it.’ I’m disappointed in Joe Biden’s decision not only to allow it to be reimplemented but to expand on it. He’s actually including more people particularly Haitians and Jamaicans in this implementation.”

Ad Free Experience
Patron
Unfortunately, brandon thought it would be a good idea to open the flood gates at all.

PREMO Member
Patron
Could this mean that Joy is getting red-pilled????


Nah, she's just pretending to be impartial. She's still the same old numbskull she always was.

PREMO Member
‘This Platform Needs To Police’: ‘The View’ Suggests Limits On ‘Free Speech’ — As Long As It Limits Joe Rogan


“Spotify hasn’t weighed in on this yet, but I guess the question really is, who’s – who should be spearheading this? Should it be Spotify?” Goldberg asked. “When you have someone like Neil Young who says, I don’t want to be part of that because it’s misinformation that’s hurting people, where is Spotify? Is it Spotify’s job to pick this up and run with the ball?”

“No, no. It’s not Spotify’s job. We have a First Amendment in this country. You can’t pick and choose when you want to use the First Amendment,” Joy Behar replied.

Former federal prosecutor Sunny Hostin pushed back, saying that she wasn’t sure she agreed with Behar.
“I’ll tell you what I think. I think Joe Rogan is a horror, a horror,” Behar continued, saying that the best way to counter “bad speech” was with “more speech” and with individuals choosing to boycott Spotify.
H

Now there is a horror for you.

As Ukrainians Fear For Their Lives, Joy Behar’s ‘Scared’ Because Her Italian Vacation Might Be Ruined​

“I’m scared of what’s going to happen in Western Europe, too,” she said.

“You know, you just, you plan a trip. You want to go there, want to go to Italy for four years. I haven’t been able to make it because of the pandemic, and now this. You know, it’s like, what’s gonna happen there?” Behar lamented, referencing the disruption in global travel due to COVID-19, a virus which has killed millions around the globe.

Somebody is surprised that Joy Behar made a stupid statement?
That's the only kind she ever makes.

Several hosts of The View on Monday suggested that the Department of Justice should investigate Fox News host Tucker Carlson and former Democratic Rep. Tulsi Gabbard for peddling “Russian propaganda,” with one panelist even noting how in the past such transgressions may have resulted in arrest.

In recent days, both Gabbard and Carlson have been proponents of the theory that the United States is developing dangerous bioweapons in Ukraine—a centerpiece of a Kremlin disinformation campaign to justify the invasion of its neighbor and potentially blame a Russian chemical weapons attack on a false-flag operation.

Clips of the ex-lawmaker on Carlson’s show discussing bioweapons in Ukraine have been showcased across Russian state media, alongside the Fox News host saying “Russian disinformation” is “true.” Furthermore, it was reported this weekend that Moscow has pushed the state-controlled press to promote Carlson “as much as possible” because he “sharply criticizes the actions of the United States [and] NATO.”

It seems the View doesn't like the truth to get out.

'So we are at war with Russia! We must send you to the gulag because freedom!' he mocked.

'Because a democracy, the one thing democracy doesn't have patience for is dissenting views from its own citizens, particularly citizens who sincerely hope and pray for the best for their own country.'

Much of the liberal anger towards 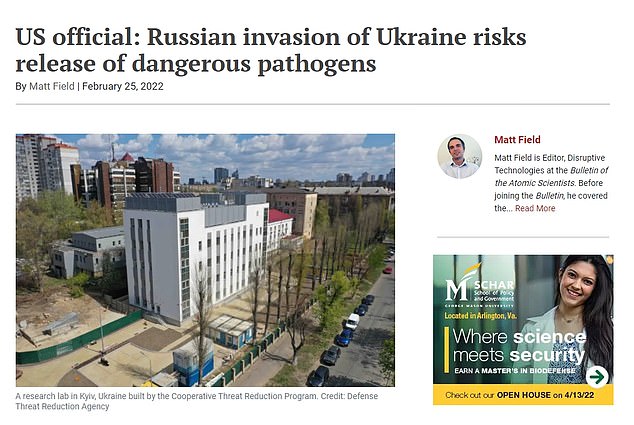 Carlson comes from his decision to highlight the United States' funding of biolabs in Ukraine.

PREMO Member
If we'll fund biolabs in China, then the chances that we'd fund one or two in Ukraine doesn't sound out of the realm of possibilities.

These people are so eaten up with their own racism that they prove time and time again it isn't straight white men that are racist it is those who make the accusations against them.

What is it about mulatto's that make them hate their white half.

Hostin’s comments came while the panel was discussing the newly appointed White House Press Secretary Karine Jean-Pierre’s conflict of interest since Pierre’s partner works as a commentator for CNN. Hostin was rather quick to dismiss it as a problem, though.

Co-host Lindsey Granger, a Black Republican, dared to disagree, as she pointed out “we have to be realistic about what happens when you’re in bed with somebody and that’s your partner or your best friend.”

Ana Navarro, another co-host, defended the issue at hand, claiming it is an unrealistic, “novel idea” to expect people working in the media and the government to not be unethical.

It was when Granger defended her conservative values that Hostin really pounced. While Granger offered to talk about them, Hostin interjected to ask if she identifies as a Republican, which Granger affirmed that she did.

The scene got particularly heated after Hostin retreated to huffing under her breath, claiming it’s an oxymoron for her to be a Black Republican. She also accused Granger of being a Trump supporter. Oh, the horror. Granger denied she ways.

PREMO Member
I'm sure there is are a lot of things Sunny doesn't understand.
H

What I don't understand is why black people who vote on the reservation cannot see that they are being led like sheep to the slaughter.

Democrats are pushing abortion. Black kids are being aborted.
Democrats are doing nothing about murders and crime in Democrat cities . Blacks are dying and are the ones suffering from these crimes.
Democrats are bringing in Brown to replace Blacks. Blacks are getting fewer jobs and losing their block vote power.
Trump did more for blacks than Obama, and they voted against him.