is this the same George Floyd?

catlingirl said:
Was it the kid in New York?
Click to expand...

Yes thank you I couldn’t think of who he was. I just remembered the news about him
O

The affluenza kid was in Tx iirc and he killed a few people in a drunken car crash.

officeguy said:
The affluenza kid was in Tx iirc and he killed a few people in a drunken car crash.
Click to expand...

I know what he did. My spellcheck error was established a few hours ago.

I think you are wrong. I don’t think It is Sap, but always good to have other views, even if we don’t agree with them. Whether same, or not, it is good to have a political barometer. I truly despise hypocrites. You have changed your forum name, as did I over our time here.
Last edited: Jun 10, 2020
H

Hopefully the Floyd funerals are over. It was like a Lincoln farewell one. Now to see what the family will do with the loot. Or see the family fighting over their shares.

Might see one or 2 on My Lottery Dream Home.

vraiblonde said:
The list goes on for white perps, too. In fact cops kill almost twice as many white people as black. Just last year (?) Minneapolis cops gunned down that white woman in the alley behind her house when she was coming out to report a crime after having called them. Google Justine Damond.

Yes but there are more white people than there are black people so that statistic is meaningless. The difference is in the way police and the justice system treat black people versus white people. When was the last time you heard of a white person having their neck kneeled on for 8.5 minutes over a counterfeit $20? I bet not often. It would end up being a funny story the white eproms told at parties.

Dylan Roof got the death penalty and is awaiting execution in Terra Haute. What do you think should have happened?

Exactly that. However he was apprehended without a scratch on him and then given a bullet proof vest to protect him. Why did a black man die over a fake $20 while a white multiple shooter get treated with kid gloves?

I remember that well and everyone on this forum was angry about that and thought the judge should have been pulled and disbarred.


Nobody is taking this Chavin person's side.

Uh, no. Fake news. Trump was specifically talking about the rioters and violent types when he said "thugs" and he didn't bring race into it.

Can you show me where that is true?

The protesters and rioters are two separate groups that happen to be in the same place. Just because the media can't separate the two doesn't mean nobody else can. In fact, most of those AntiFa shitheads are young white punks, they aren't predominantly black.

Remember Tanya McDowell? She received 5 years in jail for sending her child to school in the wrong district while the white celebrity Felicity Huffman got 14 days in jail for brining her daughters way in to UCLA.

I believe that's true, and on top of that the media sensationalizes it because race riots are good for their business.
Click to expand...

Crabcatcher79 said:
Remember Tanya McDowell? She received 5 years in jail for sending her child to school in the wrong district while the white celebrity Felicity Huffman got 14 days in jail for brining her daughters way in to UCLA.

There is a disparity in the way blacks are treated at the hands of police and the judicial system in this country without questions
Click to expand...

Can you show me where that is true?
Click to expand...

Sure. My fee for personal web search services is $10,000 per hour. How would you like to pay?
C

As i stated above that is not the case. Per capita, black people are killed more frequently at the hands of police, receive harsher treatment and tougher sentencing.

Felicity Huffman is firstly white which is why she received the sentence she did.

Nearly two-thirds of black adults (65%) say they’ve been in situations where people acted as if they were suspicious of them because of their race or ethnicity, while only a quarter of white adults say that’s happened to them.

Victims were majority white (52%) but disproportionately black (32%) with a fatality rate 2.8 times higher among blacks than whites." 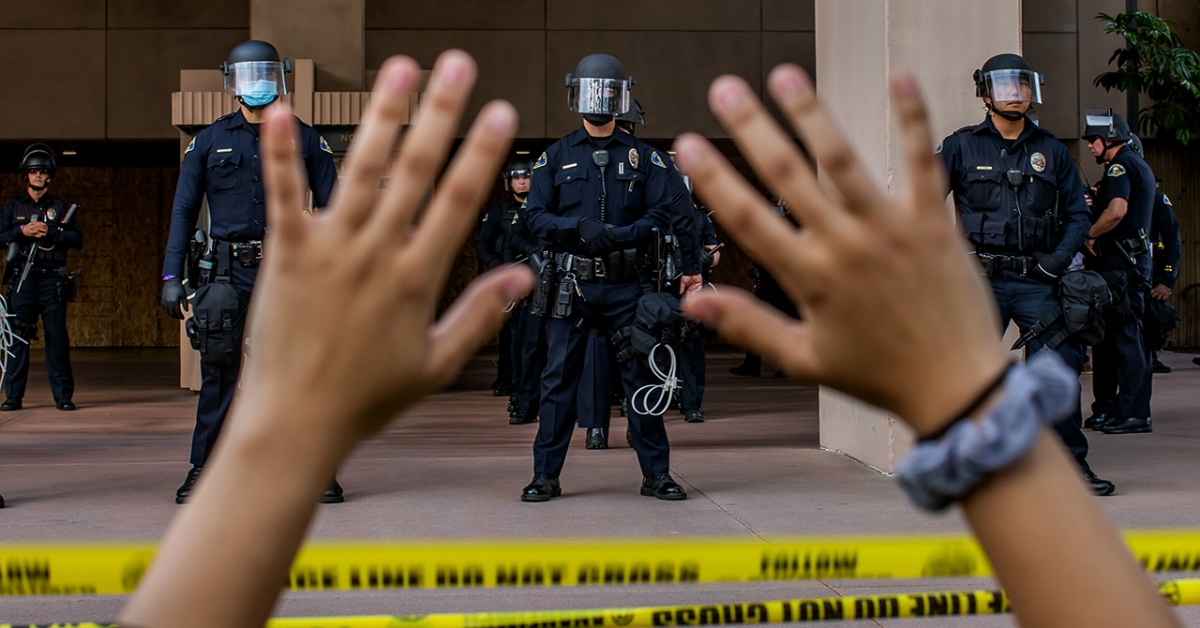 10 things we know about race and policing in the U.S.

Black adults are about five times as likely as whites to say they’ve been unfairly stopped by police because of their race or ethnicity.


Deaths Due to Use of Lethal Force by Law Enforcement

Yes it is a Class Issue, NOT a Race Issue

I'm sure Serena Williams would get the same treatment or better

Crabcatcher79 said:
Per capita, black people are killed more frequently at the hands of police,
Click to expand...

Victims were majority white (52%) but disproportionately black (32%) with a fatality rate 2.8 times higher among blacks than whites. Most victims were reported to be armed (83%); however, black victims were more likely to be unarmed (14.8%) than white (9.4%) or Hispanic (5.8%) victims. Fatality rates among military veterans/active duty service members were 1.4 times greater than among their civilian counterparts. Four case subtypes were examined based on themes that emerged in incident narratives: about 22% of cases were mental health related; 18% were suspected “suicide by cop” incidents, with white victims more likely than black or Hispanic victims to die in these circumstances; 14% involved intimate partner violence; and about 6% were unintentional deaths due to LE action. Another 53% of cases were unclassified and did not fall into a coded subtype. Regression analyses identified victim and incident characteristics associated with each case subtype and unclassified cases.


Deaths Due to Use of Lethal Force by Law Enforcement 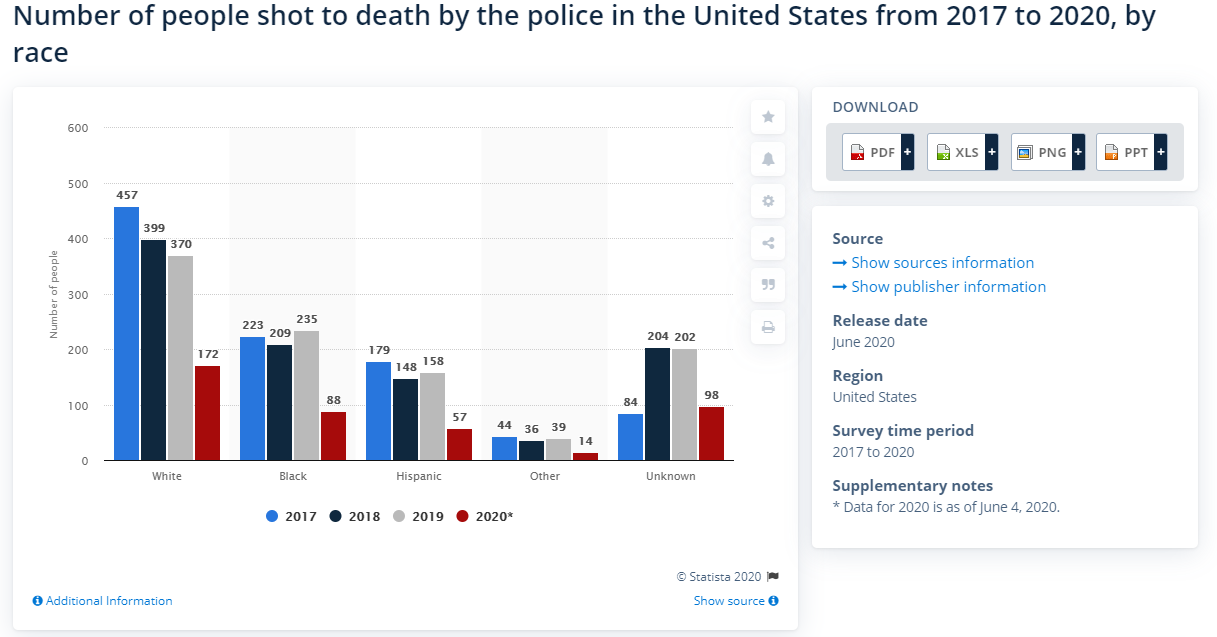 PREMO Member
Deaths Due to Use of Lethal Force by Law Enforcement
Findings From the National Violent Death Reporting System, 17 U.S. States, 2009–2012

Your chart doesnt mean anything if you dont include the percentage of the total population made up by each race.

There are more white people than black people in this country

Crabcatcher79 said:
Your chart doesnt mean anything if you dont include the percentage of the total population made up by each race.
Click to expand...

Crabcatcher79 said:
There are more white people than black people in this country
Click to expand...

MORE White People are on Welfare, but Democrats always trot out some Inner City POC when they want MORE Money for Welfare
C

GURPS said:
ah no you are spinning the facts to support YOUR World View Sapidus
Click to expand...

How is putting your chart in context spinning?

If 5 black people are killed and 5 white people but there are a total of 75 whites and 25 blacks doesn't that show you something is going on?

Crabcatcher79 said:
Please show me the last time a white person was killed by police over selling loose cigarettes or a fake $20
Click to expand...

This white person was killed for reporting a crime: 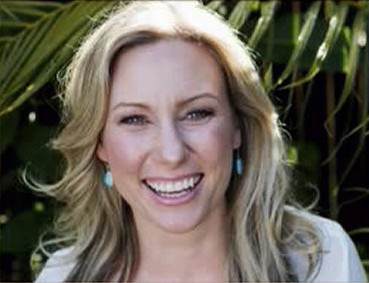 This white person was killed for not being able to crawl and pull his pants up at the same time: 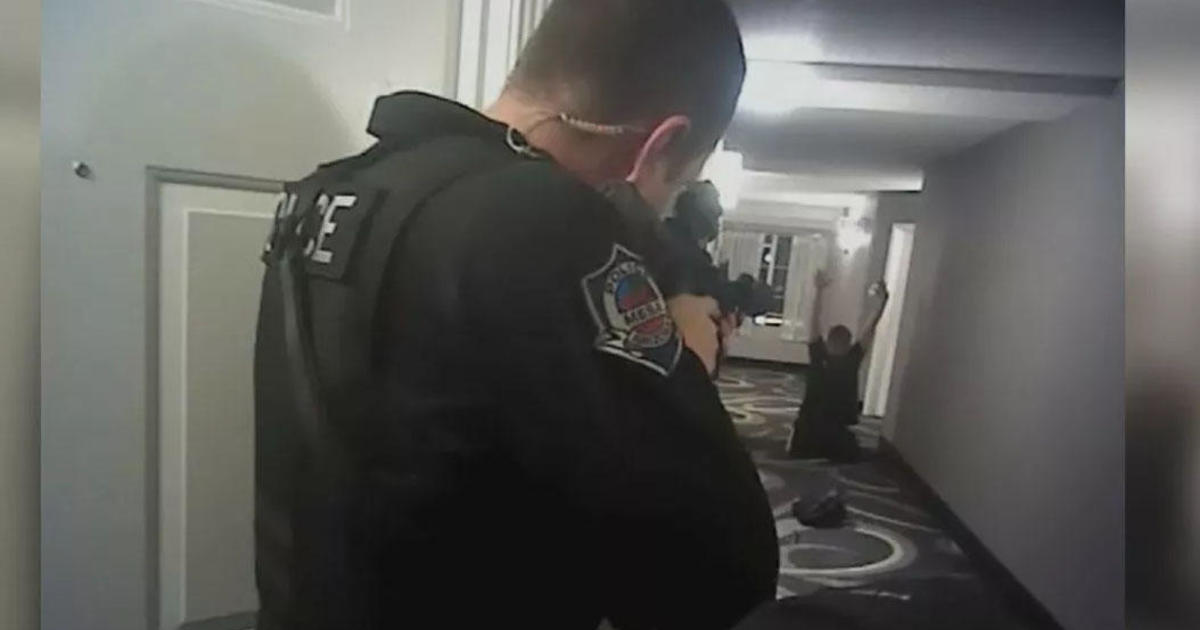 Police in Mesa, Arizona released disturbing body camera video on Thursday hours after a former officer was acquitted of murder in the fatal shooting of an unarmed man