NOTE FROM GLENN GREENWALD: Earlier this month, I reported that The Washington Post was preparing a hit piece on a group that it had long praised: the White Coat Waste Project, devoted to the singular mission of building an ideologically diverse coalition to oppose wasteful and morally reprehensible taxpayer-funded experiments on dogs and other animals. As I noted there, The Post — after years of heaping praise on this group as a rare Washington success story in uniting left and right around a common noble cause — was now working to create the exact opposite narrative: namely, that the group was driven by some sort of clandestine MAGA or pro-Trump agenda, which meant its work should be regarded as unreliable and that it is denouncing animal experimentations not out of a sincere devotion to the cause but only to undermine the sacred-to-liberals Dr. Anthony Fauci, whose agencies and budgets fund these experiments (that White Coat has been working against government experimentations on dogs for many years, long before Fauci became a political lightning rod, was no impediment to the Post's smear job, because, as is so often the case these days, its mission was political and not journalistic).

As predicted, The Post, on November 19, published their attack on White Coat. Its pro-Fauci mission could not have been more obvious, beginning with the headline: “Fauci swamped by angry calls over beagle experiments after campaign that included misleading image: Little known animal-rights group leverages hostility among conservatives toward U.S. covid chief." The article also noted that I had weeks earlier revealed what they were up to, blaming our reporting here for fueling further criticisms of Dr. Fauci, as if doing that — exposing the bad acts of a powerful political official like Fauci — is something a journalist should avoid doing.

That Post article, along with similar ones from corporate outlets that emerged, sought to depict White Coat and the conservative and independent media outlets covering this story as engaged in a “misinformation” campaign. But as noted in the below Outside Voices article we are publishing today by Leighton Woodhouse — who has been covering this story from the start — it is The Post and Fauci's defenders who are disseminating blatant disinformation, with the barely concealed motive of protecting Fauci at all costs, even if it means burying this vital story about the ethically horrendous acts of the government in the name of science.

As is true with all of the Outside Voices freelance articles that we publish here, we edit and fact-check the articles to ensure factual accuracy, but our publication of it does not necessarily mean we agree with all or even any of the views expressed by the journalist, who is guaranteed editorial freedom here. Following Woodhouse's article below, you can watch the video player to see the segment I did last night on Fox News with Tucker Carlson regarding this article and the corporate media's dishonest attempts to protect Fauci, as illustrated by The Post's dishonest hit piece.

Faucci better watch his step, if he gets Biden mad he could be replaced with some other idiot. 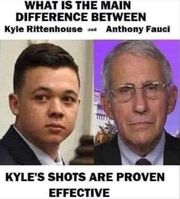 PREMO Member
‘How Do You Overhype That?’: Fauci Objects To Ron Johnson Claim That He Wants To Keep People Scared Of COVID


“Republican Senator Ron Johnson of Wisconsin said this week that you have been using coronavirus to keep Americans in fear and maintain control. Take a listen,” Tapper said, rolling tape of Johnson.

“He did the exact same thing with AIDS. He overhyped it. He created all kinds of fear saying it could affect the entire population, when it couldn’t. And he is doing – using the exact same playbook with COVID,” Johnson said.

“Obviously, that’s a bizarre and false assertion. President George W. Bush gave you the Presidential Medal of Freedom because of your leadership in the AIDS crisis,” Tapper said before turning the floor over to Fauci for his response.

“I don’t think he does either,” Tapper agreed.


Dr. Anthony Fauci says that officials “feel bad” about slapping a travel ban on seven African countries, now that the omicron variant has been confirmed in several other countries.

Fauci explained that, at the time the travel ban was imposed, not much was known about the omicron variant and the administration felt it was better to be safe than sorry.

Some nations affected by the travel ban were upset, with United Nations Secretary-General Antonio Guterres calling it “travel apartheid.”

But Fauci now says that with “more information,” the travel ban will be lifted in a “reasonable period of time.”

We Don't know, but we must do SOMETHING to Justify Our JOBS


It seems that Fauci believes in "science" -- except when he needs to terrify heterosexuals in the cause of destigmatizing gays, or frighten the entire population so as not to stigmatize the elderly and obese.

AIDS first appeared in 1981 in gay communities in New York, Los Angeles and San Francisco. Two years later, 72% of cases involved gay men, and 90% of the non-homosexual AIDS victims were intravenous drug users. Most of the rest were children born to AIDS-infected mothers or victims of AIDS-tainted blood transfusions.

This wasn't a big secret. According to CDC, by June 1983, out of 1,552 AIDS victims, only 37 were not gay men, drug users, hemophiliacs or Haitians. Frontline doctors actually dealing with AIDS patients were assuring the public, "The average person has nothing to be concerned about," as a New York cardiologist told The Associated Press. (Then, as now, you can trust your doctor; you can't trust "public health authorities.")

But Fauci was out there, alarming the entire population about the odds of contracting AIDS. In April 1983, he said: "As the months go by, we see more and more groups ... AIDS is creeping out of well-defined epidemiological confines."

A month later, he wrote: "The finding of AIDS in infants and children who are household contacts of patients with AIDS ... has enormous implications with regard to ultimate transmissibility of this syndrome." (This was based on a study of eight infants in Newark, New Jersey -- who may or may not have had AIDS, in households with people who also may or may not have had AIDS. So it was a solid study.)

Dr. Fauci suggested families should consider enforcing a vaccine mandate in their own homes ahead of the holidays during an interview with The Washington Post.

Don't worry Fauci, you are not welcome at my house. Ever.

Fauci being wrong is not surprising. It is fairly easy to be wrong making COVID predictions, even when you claim to “represent science.” The reason this is so egregious is that Fauci let his safetyism and his obsession with disrupting normal life because of COVID dictate his prediction when we already had evidence his claim would be wrong.

A study released back in February determined college football and NFL crowds did not worsen the spread of COVID. (The three doctors cite a similar study released in October that supports this conclusion). We also saw that Super Bowl LV in Tampa Bay, Florida, along with the parties and post-game celebrations, did not lead to a surge in local cases two weeks later.

In other words, Fauci had evidence his claim would be wrong seven months before he made it. So how did the oracle of science miss that?

Even if you think that Fauci is a sincere adviser and not a self-important bureaucrat who loves the camera, the fact is that he views COVID as the only thing that matters and, therefore, urges maximum safety (and thus isolation and restrictions) to solve it.

That’s why Fauci, after getting vaccinated, said in April he wouldn’t eat indoors or go to a movie theater (and implied this was his advice for the public). That’s why he recently said you should have vaccine passports for family members coming over for Christmas. That’s why he has promised the definition of “fully vaccinated” is going to change to leave out those who don’t get booster shots, which will affect employment mandates. All that matters to Fauci is COVID, which means any disruption in normal life, no matter how major, is necessary in his eyes.


GURPS said:
‘How Do You Overhype That?’: Fauci Objects To Ron Johnson Claim That He Wants To Keep People Scared Of COVID
“Republican Senator Ron Johnson of Wisconsin said this week that you have been using coronavirus to keep Americans in fear and maintain control. Take a listen,” Tapper said, rolling tape of Johnson.

“He did the exact same thing with AIDS. He overhyped it. He created all kinds of fear saying it could affect the entire population, when it couldn’t. And he is doing – using the exact same playbook with COVID,” Johnson said.

“Obviously, that’s a bizarre and false assertion. President George W. Bush gave you the Presidential Medal of Freedom because of your leadership in the AIDS crisis,” Tapper said before turning the floor over to Fauci for his response.

“I don’t think he does either,” Tapper agreed.
Click to expand...

Exactly
Undeniable fact: More people would get vaxed If it worked.


ABC News This Week host Jonathan Karl asked Fauci about comments from several of the CEOs of top airlines that “you are actually safer than you are in an ICU” on a plane because of the filtration systems on flights. Karl asked if we will reach a point where we don’t have to wear masks on airplanes.

“I don’t think so,” Fauci said. “I think when you’re dealing with a close space, even though the filtration is good, that you want to go that extra step.” 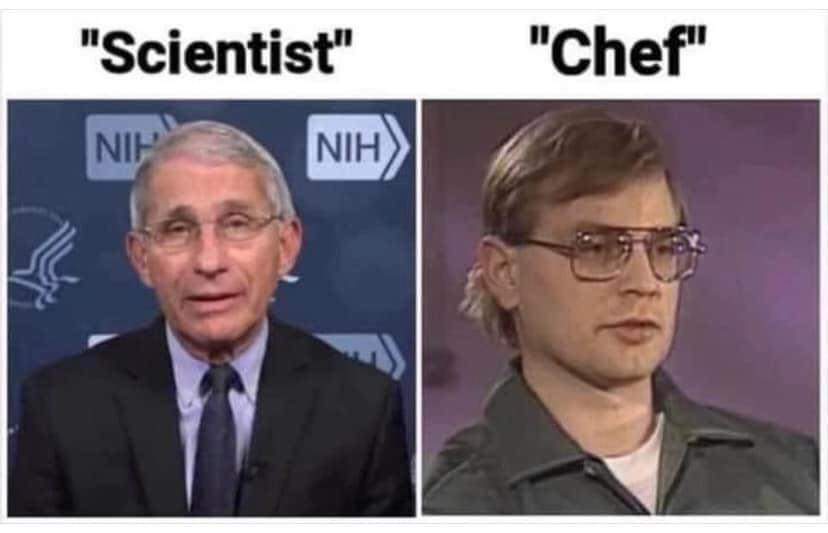